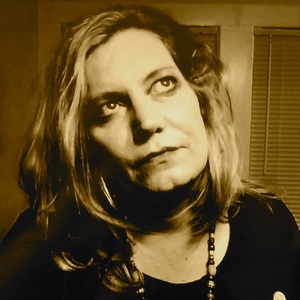 Sarah Isbell is an accomplished poet, author, songwriter, and musician who currently resides in Eureka, California. She is the author of the recently-released book of poetry “The Broken Whale” and the illustrated children’s book called “The Book of Green Goo”.  As a musician, Sarah currently performs under the name Beth Bell (BethBell.rocks), or with her alternative psychedelic rock band BeThisBell (BeThisBell.com), or improvisational jazz poetry as a duet with Holly Wood (BethAndHolly.com).

Sarah’s journey to become a respected writer hasn’t - by any means - taken a traditional path to artistic fruition. “BeTh”, as she is better known among her friends, was born as a young boy named Bill in Columbus, GA, grew up in the US and Europe through school, college and law school as boy. Then as a man. And, now as a woman. Her creative journey began in the late 90s, after a divorce, as she was winding down her career as a civil rights attorney writing for victims of discrimination and workplace abuse, and beginning her journey to cross the gender divide. During this period, facing discrimination in returning to her legal career because of her gender change, she fell in love with poetry, writing, and songwriting. “Adversity challenges one’s true soul to emerge,” Isbell often says. This sentiment is often reflected in her powerful writings, whether they be poems, essays, a humor blog or song lyrics. Recurring themes in Isbell’s writing include the struggle to overcome and the peace sought with the war in one’s mind. Beautiful, and haunting at times, her words have the power to fill and teach souls.

In addition to her acclaimed published poetry works, Isbell is a talented songwriter and musician who has released several audio music albums. (She describes herself “as a songwriter first, who loves to perform”). Isbell’s gift as a songwriter mixes elements of both genders, all while maintaining, at the core, a magical soul and mastery of craft capable of inspiring the hope within all of us to be who we truly are. The first country song Isbell ever wrote, “The Good Woman Waltz”, became a #1 song in the Texas Top 40 for original songwriters and her prolific songwriting career (she has written hundreds of songs) has placed her in several national songwriting competitions and has garnered her a publishing deal with Essex Music International, which also administers David Bowie’s song catalog.

About The Book: "Humboldt County, on the Northern Coast of California, is truly one of the
most scenic places on earth. Pieces of Humboldt is a stunning collection of exquisitely
beautiful photography and spirit-nurturing poetry about our home. The artists, poets,
and photographers who have contributed to this work all live and work in or have deep
connections to Humboldt as the natives call this magnificent coastal mountain landscape.
Inside, breathtaking scenic photography and an imaginative poetic ride await." (Tate Publ.)

Pieces Of Humboldt: A Humboldt Collective Art Project features the poetry and photography of over 3 dozen local artists including the poetry of Sarah Isbell (aka BeTh Bell) and Courtnie "Gork" Burns.  This video is an amazing recent TED Talk by Gork on Poetry, Radical Self-Acceptance, and Overcoming Suicide. We are honored for Gork to be part of our collective art project. VIDEO:
https://www.youtube.com/watch?v=4kBPDBrPbzo